All About US was a VHS video and Laser Disc release containing five videos from the US album plus, what at the time was, a new version of Solsbury Hill and the animated video for Zaar. Also included are some rare interviews and behind the scenes footage as well as showing some of the artists involved in the US album design at work on their commissioned works.

Here is an interview with Michael Coulson that first appeared in Box Magazine, the Real World in-house magazine, in 1993, where he discusses his role in documenting Peter’s activities during the US album period and the creation of the All About US film.

“All About US is a bit of a strange animal. It has the five videos from US: Digging in the Dirt, Steam, Blood of Eden, Kiss That Frog and Come Talk To Me plus a new version of Solsbury Hill and the animated Zaar from Passion. When Peter asked me to create a long form video, to include the five videos, I decided they needed a context to be seen in – a sort of historic backbone. So I used a lot of backstage and behind the scenes footage. My former partner Nichola Bruce and I have been filming Peter’s activities from the time he finished recording US onwards, and this has provided a unique visual diary of the last 18 months.

Peter understands the power of High-8 video; he’d actually done quite a lot of shooting with a High-8 camera. He shot the documentary sequences for his live video POV and he was OK about us recording the process of the creation of the images for US. We shot literally everything that went on, from Peter having his hair cut after he completed the recording, to the photo sessions form the album cover, to the artists creating work for US and then on to the making of the videos. I went out with a little camera unit of three people to document the artists in their studios and on location in France and in the case of Andy Goldsworthy on a moorland river in the Scottish Highlands. It was still early on in the commissioning process, so I was able to film them making the pieces and talking about their work – this footage was also later used in the films for the Art From US exhibition in London and Yokohama. 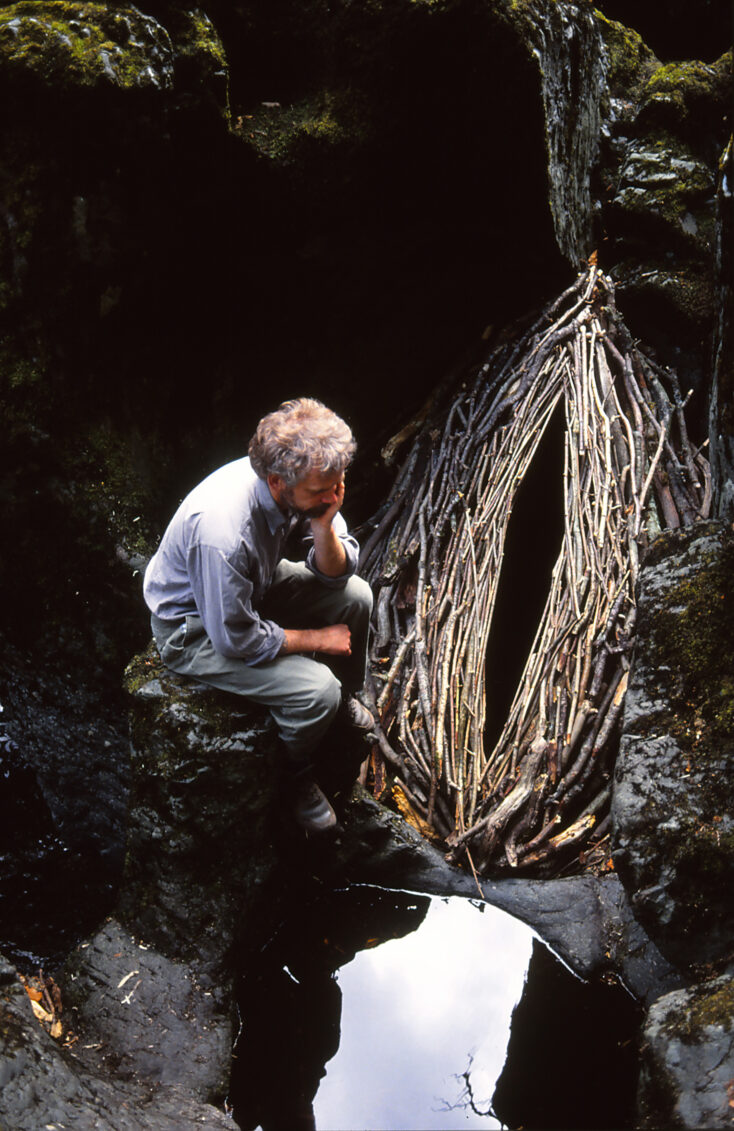 Andy Goldsworthy creating his image for Washing of the Water.

We filmed the shoot for Digging in the Dirt: the first video that Peter did down here in Box, with the director John Downer. Most of the filming was shot in the old Nissan hut on site, with an enormous sheet of ‘blue screen’ stretched down the whole side of that building. This was for all the back-projected sky sequences and other special effects. John is a well-known wildlife documentary director and some of the processes he used; filming insects, snails, fruit and vegetation for the video were also set up in different parts of the studio. Peter was very keen for the videos to be shot on site, which is all part of his dream for multimedia studio, with state-of-the-art sound and vision.

For Blood of Eden, as Nichola and I were co-directing, we brought in a small crew to film us making the video with Peter. It was a bit unnerving to see ourselves, one very tall, one very small, on film – arguing – creatively of course! We covered the whole scope of the production – Peter having his head cast in dental plaster for a snake sequence (which we didn’t actually use – soon to be released in bootleg), models being made, the set being built, and the ‘Harry’ and morph sequences being created on computer.

During the Spring of ’93 when I was working on the videos for the Secret World Tour, I talked to Robert Lepage, the tour director, about ideas for Solsbury Hill. Like me, he felt that it was a song that had come at a crossroads in Peter’s career. It seemed like the video had it’s own generic life and had evolved through several versions; there’s some early video footage of Peter with long hair when the single was first released and a video Peter had done with painter Graham Dean. I decided to do a sort of video re-mix of the different versions, using footage from Peter’s old home movies. He had some really great early footage, with these lovely fifties film dyes; Peter as a kid dressed up in cowboy outfits, with his sister and his parents in their first house. There were some art students working with us and one of them, Amy Robbins, created some painted backgrounds that had a nice naïve quality. I juxtaposed these with Peter’s home movies; it had a nice sort of tableaux feel to it and it seemed a good way to add to the visual history of that song.

On All About US you get to see some of the backstage preparations for the Grammys and the Brit Awards. One of the great things about working with Peter is that he is willing to take enormous risks. On Steam, the song that he performed for the Awards, one of the themes is the overturning of sexual stereotypes. We all decided that it would be amusing to make Peter up as this huge muscle bound hunk, almost a parody of himself. That was the idea behind the massive purple suit which was then ripped off by the female dancers to reveal his enormous hunky body; the trouble was that the joke was slightly lost on some of the Americans who actually thought that Peter looked great because he’d been working out! In his dressing room, before he went on stage, he said to me that he’d spent 20 years building up his career and that I was about to destroy it in 5 minutes. In the video, you see all the seats in the Shrine Auditorium, reserved with the guests name cards. Peter went pale when he realised that the likes of Little Richard, Michael Jackson, Eric Clapton and James Brown were going to be in the front row of the audience. He made an instant executive decision to axe the part where the girls ripped off his trousers to reveal a pair of red frilly panties. 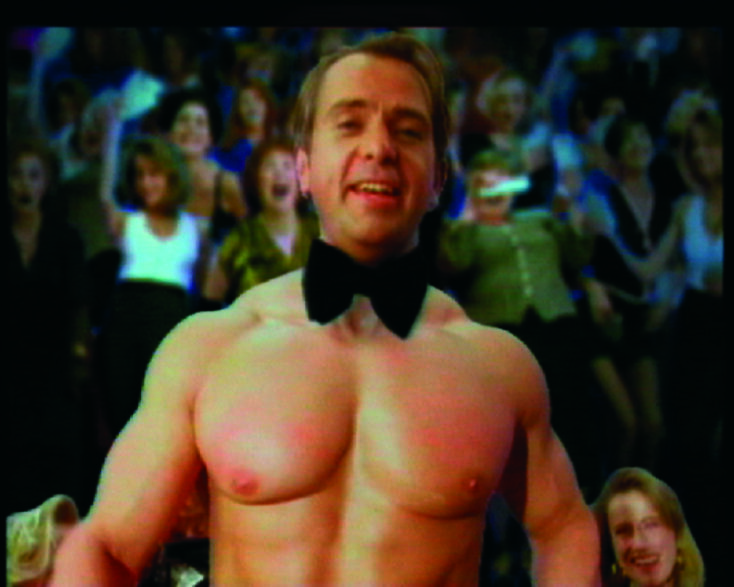 In my work, I like seeing the structure beneath the surface of things; I like to see how things are made, so a lot of the documentary material we shot has been used in All About US. I thought that it would be interesting for people to see how things are put together. There are so many different stages, from working on the storyboards and brainstorming with Peter to then getting a crew together and shooting the video. After that, you have a jigsaw, which you think is going to fit together, but the pieces never do come together exactly as you planned. And quite often it’s the accidents that provide some of the most interesting material. When we were editing Blood of Eden we set up a High 8 camera in the on-line suite and sometimes we would see something happening on the monitors that wasn’t intentional; stuff that would normally be passed by and forgotten. And we would say, “Hang on, that looked really good, how did you do that?” – sometimes the operator wouldn’t actually know what we were talking about, but with the High 8 running you can just rewind and have a look at those things that otherwise might have disappeared into the ether. It works like a visual sketchbook – you can use the material like a sketch and then recreate it later. Because the quality is quite reasonable, you can also use the footage as one of the layers in a film.

I started off with Nichola Bruce during the punk era, making experimental films, and now working with Peter has been a bit like being given an opportunity to do that all over again. My work has always been multi-layered, it’s always worked on different levels of reality and it usually comes together in post-production – I have ideas, which I discuss with Peter and the we shoot those ideas, which is stage one. Then when you start layering these things together, something starts to emerge that you didn’t expect – you surprise yourself at what develops. The film takes on a life of its own – it’s a bit like making a painting or a collage which is one of the ways I like to use film.”