“The Secret World tour was focused on communication and relationships – the ‘phone was a perfect symbol. Robert Lepage had the idea of expanding on the telephone image using the iconic red telephone box, with a cable that extended from the square proscenium stage full length to the centre of the circular stage in the audience, for the song Come Talk to Me.”

The third in this autumn’s series of live LP releases, Secret World Live, is released today. If you’re in the USA Live In Athens 1987 is also released today for you (already available everywhere else).

“remarkable… the best of the series so far.” Clash Magazine

This is the first time on vinyl for ‘Secret World Live’, presented as a 2LP set with a wide-spine single sleeve and full colour printed inner bags. The LP has been Half-Speed Remastered and cut to lacquers at 33RPM by Matt Colton at Alchemy Mastering and comes with a hi-res audio download code (24bit or 16bit). 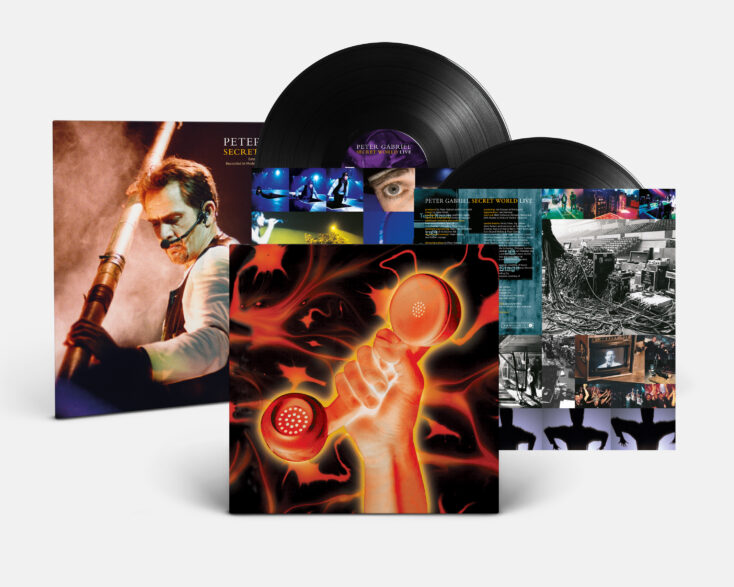 Secret World Live contains 16 tracks from the Secret World tour of 1993. Recorded at the Palasport, Modena in northern Italy on 16 and 17 November 1993. Peter has always loved playing live in Italy and the choice of venue was deliberate; “The band runs on fuel provided by the audience, and in Italy it flows freely.”

The collection spans Peter’s solo career until that point; from debut single Solsbury Hill right up to Digging In The Dirt, Steam and Blood Of Eden from US, which was – at the time – his most recent studio album.

The Plays Live and Live In Athens are already available, whilst Growing Up Live is released the 27 November.